The always bombastic and unpredictable North Koreans go hysterical again. This time the country is prepared to "go to war" with South Korea because that country is playing loudspeakers directed at North Korean territory. A headline from a UK paper reads, "More than 50 North Korea submarines 'leave their bases' as war talks with South continue " 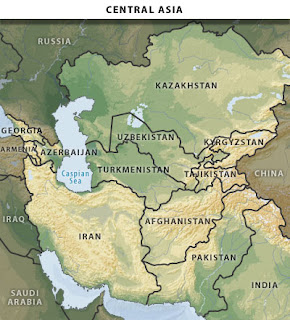 Kazakhstan, Uzbekistan, Kyrgyzstan, Tajikistan, Turkmenistan, Pakistan, and Afghanistan: seven nations located in a swath through Central Asia. Why do they all have a common "last name"? Stan is apparently an ancient Persian and/or Farsi word meaning country, nation, land, or place of, so, the country name of Afghanistan would then mean "homeland" of the Afghans, or place of the Afghans.

The first five mentioned were former satellite, neglected Republics in a Soviet Union dominated by Russians until that dissolved in 1991; when the Indian subcontinent colony gained its independence from Britain in 1947, fighting broke out between two great populations - Muslim Pakistan and Hindu India. Greg Mortenson's book Three Cups of Tea gives a glimpse of just a few of Pakistan's challenges, but a positive one. Only Afghanistan remained an independent nation (kingdom?) through the 18-20th centuries until the last 30 years. We pretty much know the story of the country since then: a Russian invasion, mujahideen resistance and ousting of the Russians, a period of neglect and fighting between warlords, the fanatical Taliban takeover, the US overthrow of that lot, and now 100,000 Western troops fighting Islamic extremists amid endless ethnic and religious jockeying ...

But today, the news is mystifying ethnic violence in Kyrgyzstan between some Uzbeks living in the country but more related to Uzbekistan, and the Kyrgyz who seem to suddenly distrust their Uzbek neighbors though they've lived together for the last 5 generations. So the headlines are about violence and death for over 200, while the bigger disruption are the 10s of thousands of Uzbeks uprooted from their homes and fleeing across the border to a country that has a name that describes them better.

As a Canadian saying goes, "they can do better than that!" And my use of the word mystifying only refers to us, as there may be true grievances and principles involved. Let's say there are. But as the 30-year old civil war of Sri Lanka showed, small nations tucked in corners of the world can pretty much grind themselves to ruins and the larger world will simply walk around them. Only when "vital interests" of a powerful nation are threatened, do these intense but small conflicts gather more attention (which in itself is not always a good thing). Let us praise all those small nations who find themselves with wise leaders who have little personal ambition but compassion for the citizens. Let's pray for Uzbek and Kyrgyz leaders who could step in and address the wounds and hurts of this flareup.
Posted by Teatree at 8:35 PM

Thanks for this...and the map. I was listening to a couple of stories about the surge of violence there and honestly couldn't place exactly where Kyrgystan was! My geography in that area is sadly lacking (much less my understanding of the history and social dynamics) since the USSR split up and all of the countries emerged on their own.

Now I'm off to look up WHERE EXACTLY is Slovenia...!